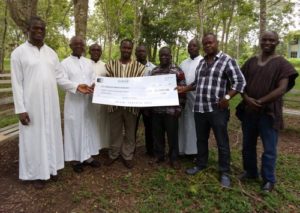 Members of the St. Teresa’s Seminary Old Boys Association, STOBA, for short, have presented their alma mater with a cash donation of GHC32,000.00 as their contribution towards the renovation of an old block to be used as an office complex. The donation according to the President of the Association came from the members of the US branch of the Association who have promised to urge other past students to show their appreciation in terms of donation to the seminary for what they benefited while going through the seminary formation even though they didn’t end up becoming priests.
Receiving the donation, the Rector, Very Rev. Fr. Michael Panful, thanked the STOBA members and also acknowledged the earlier contributions that had been given by the local branch of the Association. He promised to use the funds for the intended purpose. He further urged them to continue to support the seminary and also assured them of their constant prayers. The Vicar General, Very Rev. Fr. Bonaventure Annan, who was present at the short ceremony also associated himself with the gratitude of the Rector and extended the appreciation of the Archbishop to the group for their support to the seminary.
Photo: The Group and some staff members during the presentation.