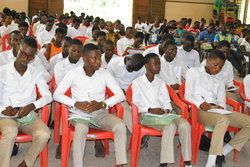 The Christian Health Association of Ghana, CHAG for short, has organized a one-day seminar for the youth of Christian denominations in Cape Coast, Central Region of Ghana. The Seminar which was coordinated by the Executive Secretary for health in the Archdiocese of Cape Coast, Rev. Fr. Daniel Neyoh, was under the theme: ‘Mental Health, Everybody’s Issue/Concern’.

One of the Resource Persons, Mr. Isaac Budu-Hayford of the Ankaful Psychiatry Hospital, took participants who were mainly young men and women through a host of issues regarding mental health issues. Many people in our society today according to Mr. Budu, are suffering from one mental illness or the other. However, our society is not talking about the illness much because of a wide range of reasons which include our belief system. Mental health issues have been left to the facilities that take care of the clients who visit these facilities with members of the society doing very little to help the mentally ill person to integrate into the society after receiving treatment. He bemoaned the apathetic attitude of even relatives towards a treated mentally ill person. He urged the participants and by extension the entire Ghanaian community relate well with such people in order to forestall any relapse. He added that if family members and friends took it upon themselves to give support to people with mental health challenges, they would recover fast and their reintegration into the society would be enhanced.

He told the gathering that Ghana was well-placed in terms of mental health facilities as compared with our neighbouring countries. However, all the three psychiatry hospitals are found in the southern part of Ghana and so it becomes difficult to offer services to people are far away from these facilities located in Ankaful, Accra and Pantang. Additionally, the cost of treatment which is free sometimes is so high and so occasionally there is shortage of drugs and that makes treatment of mental illness a difficult task. To the ladies, he cautioned them to study their would be partners well in order not to fall into the hands of people with aggravated sadism syndrome who kill partners without any remorse.

Rev. Fr. Dr. Alphonse Amano of Korle-Bu Teaching Hospital, who was also a resource person, took his time to explain to participants the meaning of mental illness and how one can avoid stigmatization and encourage reintegration mentally ill patients. Dr. Alphonse said that if we say somebody is mentally challenged, then it means that the person’s mind has been affected and, therefore cannot think properly, his or her emotions have been affected, cannot relate well with nature, has difficulty in his or her thought processes, has become less alert about things around him or her and life has no meaning to such a person. Thus, everyone, according Doc. Alphonse is a potential mentally-ill patient and so it is the responsibility of all and sundry to help remove stigmatization in order to promote good mental health condition in our communities. According to him when someone is stigmatized, the person is Separated from the society, Turned away from true peace, Isolated from the community, has his or her happiness Gored with his or her negativity Multiplied which leads to Amplified misery (STIGMA).

In his opening remarks, the Executive Secretary for health Cape Coast, Rev. Fr. Daniel Neyoh told the participants to be ambassadors in their communities in order to reduce the incidence of mental illness induced by the behaviours of some members of the communities.