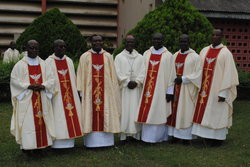 Five priests from the Catholic Archdiocese of Cape Coast and a priest from the Sekondi Takoradi Diocese have marked their 25 years of priestly ordination at Pedu Seminary with a solemn Thanksgiving Mass. The celebration which brought together family members and many well-wishers had Most Rev. Matthias Kobena Nketsiah in attendance.

Giving the homily, the Vicar General, Very Rev. Fr. Isaac Ebo-Blay said that the celebration of a Jubilee is a time of joy, liberation, reconciliation, forgiveness and love and so the occasion of their anniversary had brought a great joy to the Archdiocese and beyond. Father, however, admitted that their call like those of Isaiah and the apostles had not been without trepidation and uncertainty. The God who chose them knew their weakness yet he went ahead to call them. Any call, according to the Vicar General, brings about transformation to the called and that was what God had done in the lives of the six who were marking their anniversary. He reminded them that the journey had not ended yet. There were  still more tasks ahead of them and so they should concentrate on the mandate given to them by God and help to bring transformation to all they would encounter in the years to come.

To all priests particularly those who had gathered there as concelebrants, Fr. Ebo charged not to be selective in their ministry. ‘Cast your net into the deep for the desperate and frustrated members of the faithful and do not leave them to be lost in the crowd’, he said. He further urged all Catholics to embrace the call to discipleship so that their daily lives would be sermons to convert the many who had been straying.

Commenting on the anniversary, the Archbishop who was a concelebrant at the Mass congratulated the six and expressed his gratitude to them for what they had done for the church in the past 25 years. He urged them to show more of such commitment in the years ahead. The Jubilarians were also grateful to the Archdiocese especially the Late Archbishop Kojo Amissah who ordained them and shortly after that passed away. They prayed for him and also thanked all who had helped them in their journey. The names of the Jubilarians were: Rev. Frs. Sam Peter Gillette, Gabriel Awuaful, Augustine Essel, John Fiifi Edmundson, Philip Mensah and Fr. Agyei from Sekondi Takoradi Diocese.

Photo: The Six with Archbishop Nketsiah in the Middle