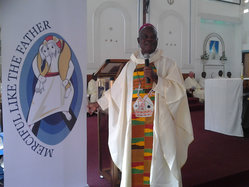 The Archdiocese of Cape Coast, under the auspices of the Metropolitan Archbishop, Most Rev. Matthias Kobena Nketsiah, has launched the Jubilee Year of Mercy at Mary Queen of Peace Parish at Fourth Ridge. The occasion brought together clergy, religious and delegates from all the parishes.

Rev. Fr. Emmanuel Abequaye, the Assistant Secretary General to the Ghana Bishops Conference who is also a member of the presbyterium, gave a brief overview of the Jubilee explaining parts of the document establishing the Year to the participants at the launch. He told the gathering about the need for every parish in the Archdiocese to draw up their own programmes which would fit into the Archdiocesan one so that the faithful could derive the full benefits of the Jubilee. He touched on the need for the Archbishop to designate certain doors in the Cathedral and also in the Minor Basilica in Elmina as Holy Doors where the faithful could enter to seek God’s mercy and also learn to show same to fellow human beings. He also suggested that the Archbishop, as part of the celebration should identify at least a place of prayer where the faithful in the Archdiocese could visit as pilgrimage site. All the participants at the launching were encouraged  to carry out acts of mercy during the year and also encouraged them to read the document establishing the Jubilee in order to understand fully what the Holy Father is asking every Catholic to do during the Year.

The Archbishop on his part urged all the clergy to participate fully in the activities that would be lined up in the course of the year so that they could encourage their congregations to also actively participate in the celebration. He named Rev. Fr. Vincent Asare-Bediako , a parochial vicar at the Cathedral, as the coordinator for the celebrations of the Year in the Archdiocese and concluded with the launch.