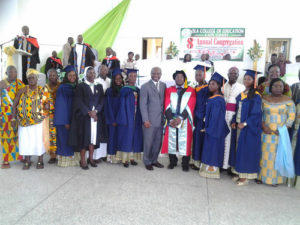 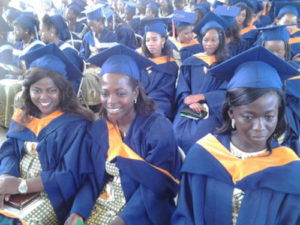 Our Lady of Apostles College of Education, Cape Coast, has held its 8th Annual Congregation with a call on teachers to upgrade themselves academically.
The call was made by Prof. Dora Francisca Edu-Buandoh, Dean, Faculty of Arts, University of Cape Coast at the congregation grounds as the Guest Speaker. She said teachers were key partners in the process of manpower development in the nation and so called on those who practise the noble profession to equip themselves with the necessary knowledge in order to impact positively on those they teach.
Teachers should be empathetic to the learning needs  of their students in order to inspire in them the competence and confidence they need for their future life, she said. The Prof. also called on the government and all stakeholders in the education sector to expedite the process in resolving the impasse between Teacher-Trainees and Government with regard to their allowances so that the students could concentrate and learn.
The Principal, Rev. Sr. Elizabeth Amoako-Arhin was full of praise for the graduating teachers for their outstanding performance in their final examinations. She  said out of 275 candidates presented, six of them got First Class Honours, 117 had Second Class Upper, 123 Second Class Lower, 28 3rd Class with one Pass. According to her, the performance was the best result the College had obtained since its upgrade to a Diploma Awarding Institution. She called on the newly trained teachers to show great commitment in the discharge of their duties.
Adding his voice to the calls already made, Most Rev. Matthias Kobena Nketsiah, who is also the Chair of the College Governing Council, urged the graduating teachers to exhibit the good training they had acquired in the Institution at their places of work. He challenged them to uphold high moral uprightness in their profession and also be faithful to their families and duty.
Hon. Dr. Ato Essuman, (CEO Profile Consult), asked for a change in the traditional requirement for admission into Colleges of Education. He called for  consideration of people with special skills but who cannot make the required grade into the Colleges.
Some students who excelled were given awards with the overall best performing student award going to Ms Alice Amoakwa-Buadu
Dignitaries at the function included Principals from sister Colleges, a representative of the Vice Chancellor of UCC, the Cape Coast Metro Director of Education, Nananom, Priest and Religious as well as families and friends of the graduating teachers.